Home » Uncategorized » Pappa no loser, ‘Ma no bitch: ALWAYS there for children

Pappa no loser, ‘Ma no bitch: ALWAYS there for children

I started teaching Karate in Zambia in 1977/ 78, working closely with children and youths almost immediately. So, like many other children and youths, there was a time I strongly believed my parents were the lousiest a guy could have:

You’d expect then that when my father passed on 13 years ago I danced with joy. No, I didn’t. Soon after my mother called me in Oslo to break the news I stood erect, kept my cool, and walked tall; went to South Africa and buried my father with honour and dignity befitting a King. For in my adult years, I came to understand that Pappa ruled actually; he indeed was a Big Brain. His strong mind and resilience, his style, his tolerance and patience, his love for and devotion to his family, his extreme all round generosity and compassion, loyalty, as well as sense of fairness and justness far outweighed the fact that he died on the verge of personal pauperism and all that it implies. Aghhh, who needs private jets?

You’d expect that ‘Ma herself would then rock & roll with her long-time rich and powerful admirers when she became a widow. She didn’t. Three years after Pappa left us, my siblings and I confronted ‘Ma and encouraged her to allow herself to fall in love with a new man and live happily ever after. She resolutely dismissed our crazy modern ideas, telling us the love for her late husband was just too great, and that what she then (and now!) wanted to do was to alone enjoy her children in peace. Guess my state of shock! Ahhh, so this is love?

I carry with me reflections on my life with my parents as a demanding, above average smart, stor i kjeften/ big-mouthed, sensitive, big-ego child when I today start the new 2011/ 12 Karate training season with my students in Norway. This is the 24th season Norwegian parents will once again humble me with their confidence and trust as they send their children to come and train with me. All sorts of children will come and go. Many fall out, some will stay, enduring this strange form of training with this strange man speaking strange Norwegian, English, French, and several other strange foreign languages that come to his head depending on how strange his dårlig humør/ bad mood on any strange training day is. 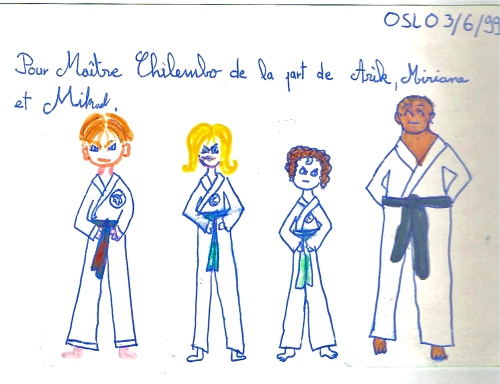 When I do not have any children of my own yet, I am in a situation where I easily come to love other people’s children very much. I’m ever grateful to all the parents who allow me to be friends with and be reserve Pappa for their children, regardless of circumstances there and then/ here and now.  It goes without saying, therefore, that the upbringing and the welfare of children are matters very close to my heart.

From my own experience as told above, I now know that children can be difficult and impossible. Due to mental and emotional immaturity, as well as ignorance, they can come out with the most outrageous demands to, and expectations of their parents. I am eternally indebted to my parents, as well as many other adults around me for never having lost it with me even at my wildest and meanest behaviour as a child and youth. Now as an adult myself I have a much more profound understanding of the great work my parents have done for my siblings and I. Taking into consideration their own respective rough origins and tough upbringings from two totally different parts of Africa, I can argue that the odds were against us coming out so well in the end, carrying Pappa’s Big Brain and ‘Ma’s entrepreneurial flair in our heads and hearts. I know of several other families in more or less similar situation as mine who never made it, both in South Africa and Zambia.

In the light of the July 22, 2011 tragedy in Oslo and Utøya, I implore all parents to always be there for their children, no matter how hard for whatever reason. If I knew of an easy way, I would tell the children on the other hand that no matter how stupid and mean their parents might seem to be, the parents and many other responsible adults around them love them very much and only want the best in life for them. Parents/ adults and children/ youths must continually work at cultivating trust and confidence in one another.

But then again I acknowledge that not all are born Mahatma Gandhi or Baby Jesus unfortunately; nothing and nobody is perfect in nature. And so, much like an occasional tsunami will strike in a most unprecedented brutal way in Japan; or an old warlord will deny defeat even if it is abundantly clear that his fall is imminent, some people will be lost causes much like the perpetrator of the aforementioned abominable act of 22-7.

Good and supportive parents and all responsible adults can only be judged to be that way to the extent that their children manage to grow out of that hell called childhood, and the at times schizophrenic nightmare called adolescence into decent, responsible, value-adding members of society. This is my constant goal in my work and play with children and youth any time. BRING THEM ON!!!