RAPE, AFRICANS, NIGGERS IN THE DARK. 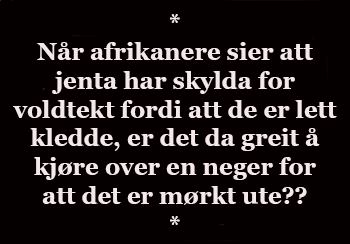 The Norwegian text picture above was posted on a friend’s Facebook timeline a few days ago. It reads:

I commented, “Why should a nigger be punished for Africans’ opinions on things? By the way, what is a nigger, really?”

Her daughter responded, “Whether it’s an African or Asian has nothing to say, Simon… it’s the point which is important to grasp… not what nationality is being referred to!” … (Continued in the book: “MACHONA BLOGS – As I See It”. Order Simon Chilembo books on Amazon)